On why I became an academic 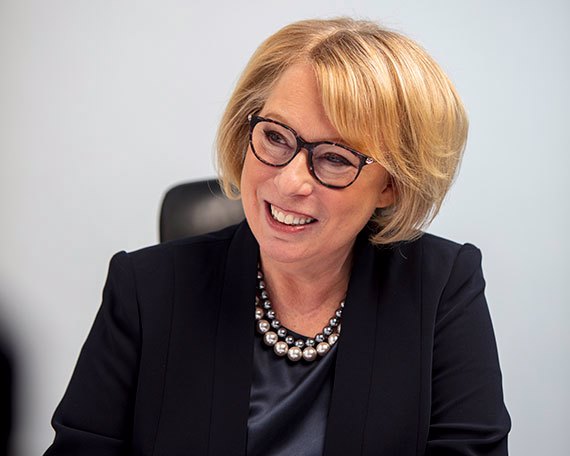 The CIPD’s Work magazine interviewed me about my research and on why I became an academic. I talk about leadership, collegiality, the ‘Great Resignation’, and the smell of libraries. 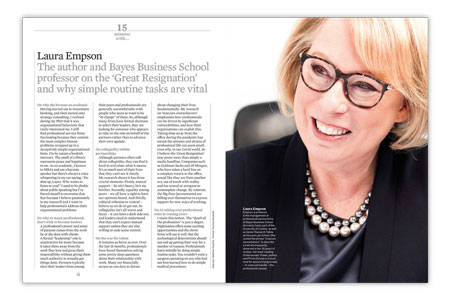 On why she became an academic

Having started out in investment banking, and then moved onto strategy consulting, I realised during my PhD that it was organisational behaviour that really interested me. I still find professional service firms fascinating because they contain the most complex human problems wrapped up in a deceptively simple organisational form. I’m by nature a bookish introvert. The smell of a library represents peace and happiness to me. As an academic, I lecture to MBAs and am a keynote speaker but there’s always a voice whispering in my ear saying, “Do shut up, Laura. Who wants to listen to you?” I used to be phobic about public speaking but I’ve forced myself to overcome that fear because I believe passionately in my research and I want to help professionals address their organisational problems.

On why so many professionals don’t wish to become leaders

A professional’s power and sense of purpose comes from the work he or she does with clients. A formal “leadership” role is unattractive for many because it takes them away from the work they love and gives them responsibility without giving them much authority to actually get things done. Partners typically elect their leaders from among their peers and professionals are generally uncomfortable with people who seem to want to be “in charge” of them. So, although many firms have formal elections to select their leaders, they are looking for someone who appears to take on the role on behalf of the partners rather than to advance their own agenda.

On collegiality within partnerships

Although partners often talk about collegiality, they can find it hard to articulate what it means. It’s so much part of their lives that they can’t see it clearly.
My research shows it has three crucial elements. Firstly, mutual support – he ain’t heavy, he’s my brother. Secondly, equality among peers – we all have a right to have our opinions heard. And thirdly, cultural cohesion or control – believe as we do or get out. So collegiality isn’t all warm and fuzzy – it can have a dark side too,  and leaders need to understand that they can’t expect mutual support unless they are also willing to cede some control.

On the war for talent

It remains as fierce as ever. Over the last 18 months, professionals have found themselves asking some pretty deep questions about their relationship with work. Many are financially secure so can dare to dream about changing their lives fundamentally. My research on ‘insecure overachievers’ emphasises how professionals can be driven by significant vulnerabilities, and how their organisations can exploit this. Taking time away from the office during the pandemic has meant the stresses and strains of professional life can seem small, even silly, in our Covid world. So I believe the ‘Great Resignation’ may prove more than simply a media headline. Companies such as Goldman Sachs and JP Morgan, who have taken a hard line on a complete return to the office, sound like they are from another era, out of touch with reality and too scared or arrogant to contemplate change. By contrast, the Big Four [accountants] are falling over themselves to express support for new ways of working.

On AI taking over professional roles in coming years

I resist this notion. The “death of the professions” is just a slogan. Digitisation offers some exciting opportunities and the clever firms will use it well. But the technological determinists should not end up getting their way for a number of reasons. Professionals learn initially by doing simple routine tasks. You wouldn’t want a surgeon operating on you who had not first learned how to do simple medical procedures.

Acknowledgement: The article is reproduced by kind permission of the CIPD.

Follow me on Linkedin to be notified of my latest articles, podcasts and research papers as soon as they are published.